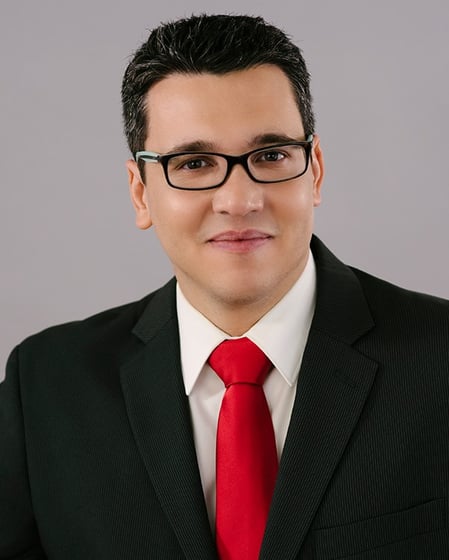 New York born and Florida-raised Marco La Manno joined SNN in April 2016. He is the morning meteorologist and weekend anchor on SNN.

While attending the University of Florida, he forecasted weather for two years, won 1st Place in the College Florida Associated Press Broadcasters awards for Short Light Feature, and graduated with a bachelor’s degree in Telecommunications - News and a certificate in meteorology.

His next stop was WMGT in Macon, Georgia. He forecasted weather in the Peach State for more than 3 1/2 years, franchised many morning news segments from pet adoptions to video game previews, and won 1st Place for Best Light Feature at the Georgia Association of Broadcasters awards.

Since returning to Florida, Marco has enjoyed highlighting local marching bands in the area, showcasing ballroom dance, and highlighting many heart-warming stories in the area. He, along with several co-workers, brought home a first place award for Public Service in Television Journalism with their half hour special Hurricane Amnesia in 2017. Marco also won 1st place for light feature reporting in the Sunshine State Awards in 2021 for his COVID storyVideo games strengthen real relationships in virtual worlds in the age of COVID. That story also won 3rd place in the 2021 Green Eyeshade Awards for Feature Reporting/Television.

In his spare time, Marco loves video gaming, ballroom dancing, restaurant hunting, and cheering for the Florida Gators. Now he’ll do it in the beautiful state where he was raised, plus he’s only a few hours from family. He’s thrilled to be here, and if you’d like to reach him, contact Marco at https://www.facebook.com/TheMarcoLaManno.